NOAA scientists record sound in the deepest part of the world’s ocean and discover a cacophony of sounds both natural and human generated. For three weeks, a titanium-encased hydrophone recorded ambient noise from the ocean floor at a depth of more than 36,000 feet, or 7 miles, in the Challenger Deep trough in the Mariana Trench near Micronesia.

The pressure at that depth is incredible. Atmospheric pressure in the average home or office is 14.7 pounds per square inch (PSI); it is more than 16,000 PSI at the bottom of the Mariana Trench.

“You would think that the deepest part of the ocean would be one of the quietest places on Earth,” said Robert Dziak, a NOAA research oceanographer and chief project scientist. Yet there is almost constant noise. The ambient sound field is dominated by the sound of earthquakes, both near and far, as well as distinct moans of baleen whales. The hydrophone also picked up sound from ship propellers.

The project was designed to establish a baseline for ambient noise in the deepest part of the Pacific Ocean. Human-created noise has increased steadily in recent decades and getting these first recordings allows scientists in the future to determine if the noise levels are growing and how this might affect marine animals that use sound to communicate, navigate and feed, such as whales, dolphins and fish. In early 2017 researchers will deploy the hydrophone for a longer period of time and attach a deep-ocean camera.

Hydrophone lowered in the Mariana Trench 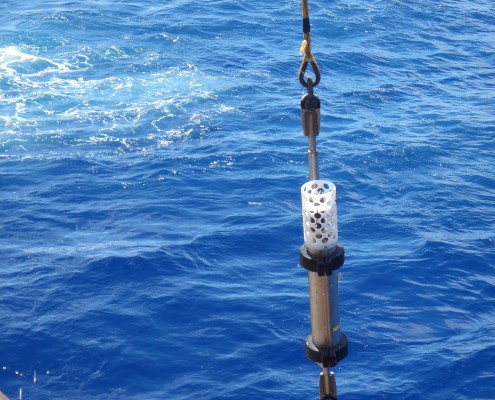 Act to Govern Saltwater Recreational Fishing in the U.S.
Scroll to top