Gord Ellis is an angler, hunter, guide and outdoor columnist who hangs his hat in Thunder Bay Ontario. With over 1,000 published articles to his name and over 20 awards for his writing, he’s more than well-known along the north-west shore of Superior. More than that though, he’s respected for his conservation ethic and willingness to share his passion and hard-earned local knowledge to both young and old alike. Lawrence Gunther and his guide dog Moby met up with Gord on a beautiful April day to fish for Steelhead on three area ice-cold rivers. While warming up, Gord and Lawrence took a few minutes to reflect on the role of social media as a tool for sharing local knowledge and observations in ways that build informal networks of citizen scientists committed to the conservation of natural resources, this week on Blue Fish Radio. 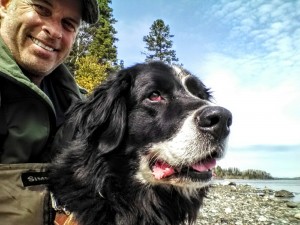 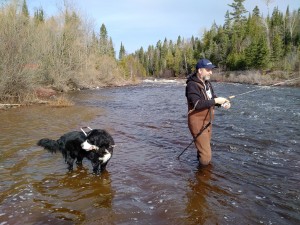 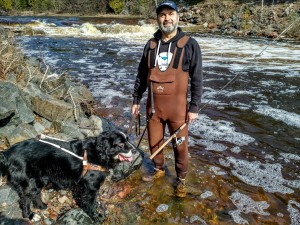 Moby and Lawrence on the Bank of Wolf River